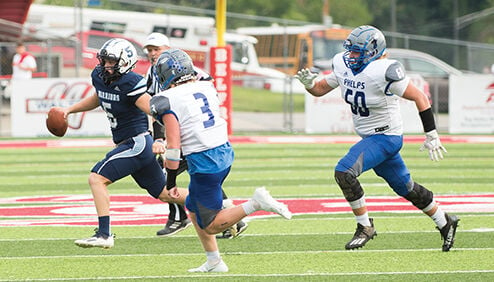 East Ridge quarterback Dylan Burdine runs with the ball as Phelps’ Stevie Todd Layne (3) and Landon Dotson (60) pursue on defense. The Warriors picked up a 40-26 win. 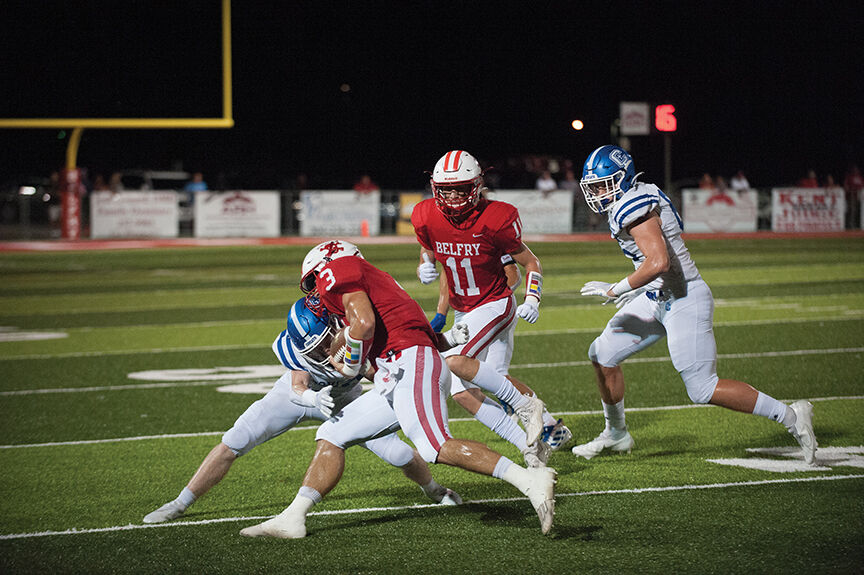 Belfry senior Isaac Dixon runs with the ball as he is wrapped up by a Covington Catholic defender last Friday night in the Pike County Bowl. The Pirates fell 42-13 to the Colonels. 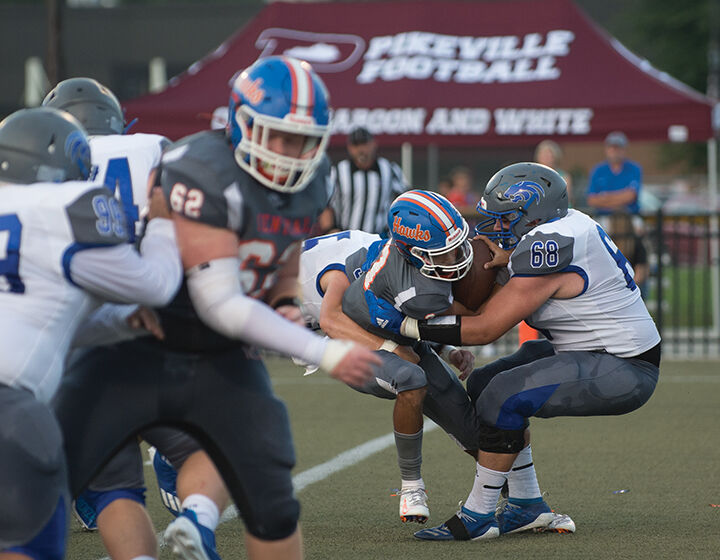 Shelby Valley’s Gavin Branham (68) and Caleb Lovins (55) wrap up Pike Central quarterback Tayvian Boykins in the Pike County Bowl. The Wildcats picked up a 59-32 win over the Hawks.

BELFRY — East Ridge football is setting out to turnover a new leaf on the football field. So far, the Warriors are 2-0 and winning the turnover battle has fueled both wins.

Friday night, East Ridge turned Phelps over twice and turned those into TDs as the Warriors topped Phelps 40-26, in the 3th WYMT/Community Trust Bank Pike County Bowl, which was played at Belfry.

The win gave East Ridge its first win over Phelps since the 2016 Pike County Bowl, the two teams did not play in 2020.

Turnovers and the legs of East Ridge quarterback Dylan Burdine churned out the victory. Burdine rushed for all six East Ridge scores, pushing the Warriors to the win.

“Our kids are trying hard,” East Ridge head coach Donnie Burdine, Jr. said. “We played like garbage tonight. It was a struggle, Phelps had a good game plan, but we didn’t play well. We’ve got to get better at throwing the ball, we were one-dimensional out there. But our kids are working hard and giving it their all.”

But it wasn’t easy. Phelps came out strong, scoring first as Bryson Locklear broke free for a 41-yard TD run, giving the Hornets an early 6-0 lead.

Phelps struggled to stop the Warrior ground game. East Ridge pushed it down the field and scored on a two-yard Burdine run, taking an 8-6 lead, with 6:52 to play in the first quarter.

Phelps answered by air on the next possession, as quarterback Stevie Todd Layne connected with Cainan Land for a 22-yard TD strike, giving the Hornets a 14-8 lead, which they would hold through the first quarter.

But momentum shifted in the second quarter. East Ridge scored early in the quarter, on a short run by Burdine, tying the game 14-14.

Things shifted for good in the final two-minutes of the first half. Phelps was driving when East Ridge’s Zack Mason picked off a Phelps pass, giving the Warriors possession before the half. East Ridge capitalized, putting together a seven play 75-yard scoring drive, fueled by two long passes by Burdine to Isaiah Adkins and Brad Howell. The drive was capped off with a short TD run by Burdine, giving the Warriors the 20-14 halftime lead.

For Mason, that was his second interception in as many games, Mason sealed the season-opening win over Floyd Central with an interception.

“That was a big sequence,” coach Burdine said. “That’s two games in a row for Zack (Mason). He has made two key interceptions. I’m proud of him. We did a good job of taking the turnovers and turning them into points.”

Phelps refused to go away. Locklear struck again for the Hornets, this time from 28-yards out, trimming the East Ridge lead to 26-20, with 3:50 to play in the third quarter.

But Burdine and the Warriors put the game on ice in the fourth quarter as Burdine recorded TD runs of one-yard and 18-yards to give the Warriors a 40-20 lead with 6:30 to play in the game.

The game ended with fireworks, as East Ridge threw a deep TD pass on the second to last play in the game, the play was called back due to a holding penalty, but it prompted fireworks in the postgame handshake as the coaches exchanged words.

Both teams have home games next week as East Ridge entertains Betsy Layne and Phelps plays host to Prestonsburg; both contests are scheduled to kickoff at 7:30 p.m.

That didn’t happen as the Pirates turned the ball over four times en route to a 42-13 loss to Covington Catholic.

The loss puts the Pirates at 0-2 on the season.

The Pirates first mistake happened early in the game.

Belfry forced the Colonels to go three and out and punt on the opening drive.

On the punt, Belfry fumbled the ball and Covington Catholic took over at the Belfry 21-yard line. Quarterback Adam Holtz scored the game’s first TD with 7:33 left on a two-yard plunge. After the extra-point, the Colonels led 7-0.

Belfry answered on its first drive as Isaac Dixon capped off the drive with an eight-yard TD run with 1:43 left in the first quarter. The extra-point tied things up at 7-7.

Belfry got back into the game in the third quarter.

Covington Catholic answered Belfry’s score with a quick score of its own. Hummel scored his second TD of the game from 23 yards out with 9:06 left in the third to push the lead to 28-13.

The Colonels came up with an interception on a pass from Dixon to set up another score. This time Holtz found Preston Agee for a TD in the end zone with 3:08 left in the third as the lead grew to 35-13.

Belfry turned the ball over on downs to open the fourth quarter of play.

That turned into the final score for the Colonels as the lead grew to 42-13.

Belfry (0-2) is scheduled to take on Class 2A power Lexington Christian Academy at home Friday night at 7:30 p.m.

Second half fuels Wildcats past Hawks in bowl

It was a tale of two halves for Shelby Valley Saturday night in the 36th WYMT/Community Trust Bank Pike County Bowl.

The Wildcats dominated the second half as they picked up a 59-32 win over the Hawks.

The first half was back-and-forth.

Shelby Valley opened the game with an onside kick recovery.

The Wildcats didn’t do anything with the opening drive, but good field position helped. Shelby Valley forced Pike Central to a three and out on its opening drive and got the ball back in Wildcat territory.

That set up a six-yard run from quarterback Russ Osborne. Osborne scored with 7:53 left in the first half to give the Wildcats a 6-0 lead.

Pike Central answered on its next possession and quarterback Tayvian Boykins capped off the scoring drive with a one-yard TD with 5:00 left in the first quarter. Boykins found Noah Iricks for the two-point conversion as the Hawks took an 8-6 lead.

Shelby Valley turned the ball over on downs on its next possession.

It didn’t take Boykins long to find the end zone as he broke a 63-yard TD run with 9:17 left in the first half to push Pike Central’s lead to 16-7. After the two-point conversion, the Hawks held a 16-6 lead.

Shelby Valley answered on its next possession as Osborne found Brady Bentley for a 23-yard TD pass with 5:35 left in the first half. Ethan Bentley scored the two-point conversion to cut the lead to 16-14.

Boykins went back to work on the Hawks’ next possession as he scored on a 30-yard TD run with 4:29 left in the first half. After the two-point conversion, Pike Central held a 24-14 lead.

Boykins had a monster game for the Hawks as he rushed for 280 yards and four TDs on 30 carries. Boykins was four for 13 passing for 15 yards as well.

On the kickoff, Shelby Valley’s Ethan Gunter took the ball nearly 60 yards for a score to cut the lead to 24-22 with 4:19 left in the first half.

The third quarter only saw one score.

Newsome scored on a 23-yard TD run with one second left on the clock. Osborne added the two-point conversion to put the Wildcats on top 30-24.

After that, it was all Shelby Valley.

Pike Central fumbled and the Wildcats recovered the ball in their own territory. Osborne scored with 11:45 left in the game and Newsome added the two-point conversion as the lead grew to 38-24.

After forcing the Hawks to punt, Osborne found Ethan Bentley for a 35-yard pass play. That set up a 13-yard TD run from Newsome to push the lead to 46-24 after the two-point conversion with 10:04 left to play.

Boykins answered for the Hawks with his fourth TD of the game with 4:39 left to play to cut the lead to 46-32.

Osborne put the finishing touches on the win with another rushing TD with his third rushing TD of the game. The extra-point set the game’s final score at 59-32.

Shelby Valley had 559 total yards of offense in the game.

Osborne was 10 for 18 passing for 163 yards and a TD and two interceptions. He added 91 yards rushing and three TDs on 11 carries.

Caleb Lovins led the Wildcats with 15 total tackles. Gavin Branham and Ratliff each added eight tackles on the night.

Pike Central had 343 yards of total offense on the night. Boykins accounted for most of it.

On defense, Xavier Rogers led Pike Central with 11 total tackles and Iricks followed with 10. Boykins and Iricks each had interceptions for the Hawks.

Pike Central (1-1) was scheduled to take on Letcher Central Friday, but the Hawks are in COVID protocol and Pikeville has replaced them in that game.

The Panthers, unfortunately, were just fans Saturday night as Bourbon County had to pull out of the game because of COVID-19.

Pikeville tried to find a game, but couldn’t.

So the Panthers acted as host and bystanders as Shelby Valley and Pike Central played on the biggest stage of the regular season.

Pikeville coach Chris McNamee released this statement on social media about not being able to participate in this year’s Pike County Bowl.

“Unfortunately, I’m afraid we have exhausted every effort to find an opponent for tonight’s Pike County Bowl game.

“I appreciate those that stepped in to help through social media, phone calls and text. As one of the longest standing bowl games in the state, my heart breaks for our players as they will not be able to participate in this game again this year.

“I encourage our fans and those that have purchased tickets to come to the first game between Pike Central and Shelby Valley and cheer for the young men that get to play.

“We get so caught up in RPI, rankings, and win/loss records that we lose sight that we need to celebrate the opportunity to compete.”

Pikeville is scheduled to be back in action this Friday on the road at 7:30 p.m. against Class 4A Letcher Central. The Cougars were scheduled to take on Pike Central, but the Hawks had to pull out of the game because of COVID-19.

Did the Kentucky General Assembly make the right decision in killing the statewide mask mandate for schools in the commonwealth?