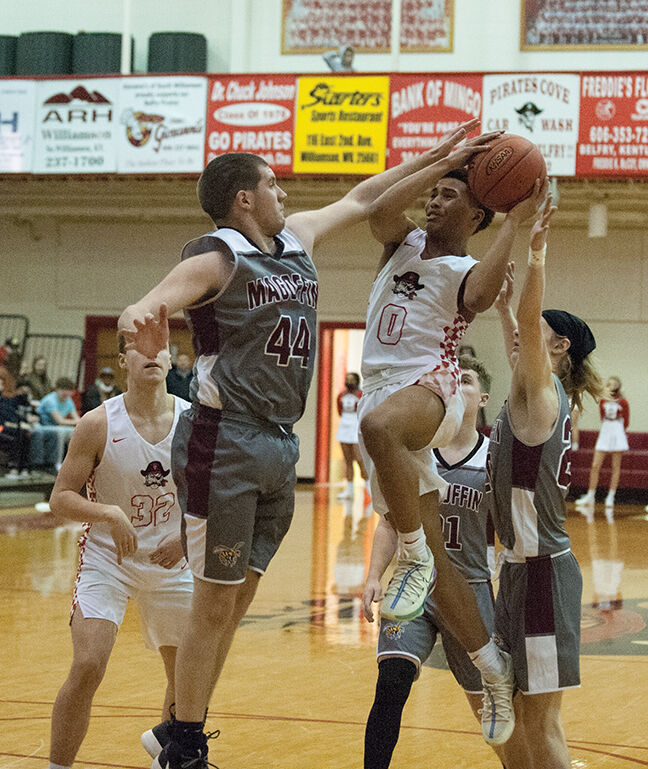 Belfry’s Sal Dean goes up for a shot against Magoffin County in the 46th Annual Mountain Schoolboy Classic Saturday. The Pirates picked up an 81-71 overtime win over the Hornets. 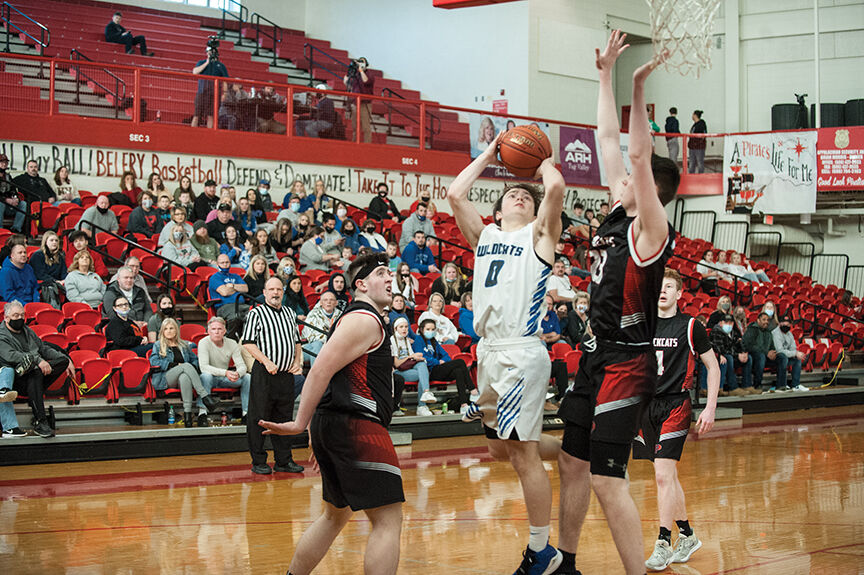 Shelby Valley’s Anthony Pallotta goes up for a shot over Prestonsburg’s Ryan Rose Saturday during the 46th Annual Mountain Schoolboy Classic at Belfry.

The Belfry Lady Pirates kicked things off with a 57-35 win over Letcher Central. Johnson Central followed with a 74-69 win over Pikeville in the opening boys’ game. Shelby Valley picked up a 68-43 win over Prestonsburg and the host Belfry Pirates knocked off Magoffin County 81-71 in overtime.

Pikeville’s Rylee Samons didn’t finish the game and that hurt the Panthers’ chances of walking away with a win.

Cory VanHoose had a huge game for the Golden Eagles. VanHoose had a double-double to lead the way for Johnson Central. He scored a game-high 30 points and pulled down 10 rebounds. John King also finished with a double-double for the Golden Eagles. King scored 17 points and pulled down 10 rebounds. Isaiah May also had an excellent game with 16 points; he knocked down five threes on the day. Kamen Slone added six points. Connor Lemaster finished with three points and Grant Rice added two.

Johnson Central finished the game 26 of 54 from the field (48.1 percent). The Golden Eagles were nine of 26 from behind the three-point arc. Johnson Central knocked down 13 of 16 free throws (81.2 percent).

The Golden Eagles pulled down 38 rebounds.

Pikeville didn’t have stats up at presstime.

Shelby Valley’s speed and pressure was too much for the Blackcats in the Mountain Schoolboy Classic at Belfry Saturday.

Kaden Robinson led the way for the Wildcats with a game-high 22 points and six rebounds. He was four for seven from behind the three-point arc. Zack Johnson followed with 16 points and five rebounds. Point guard Keian Worrix added seven points and so did freshman Chaz Brown. Shelby Valley center Anthony Pallotta finished with four points and nine rebounds. Caleb Lovins, and Jacob Hall also scored four points each for the Wildcats. Freshman Russ Osborne added three points and Logan Hawkins chipped in with one point.

Shelby Valley knocked down nine of 23 from three-point range (39.1 percent).

The Wildcats were three for five from the free-throw line (60 percent).

The Pirates trailed Magoffin County by double digits at halftime.

Belfry just buckled down and played its game in the second half.

Sal Dean and Bol Kuir led the Pirates to an 81-71 overtime win over the Hornets.

The Pirates were six for 12 from the free-throw line (50 percent).

The Pirates are on a three-game winning streak after the win against Magoffin County.