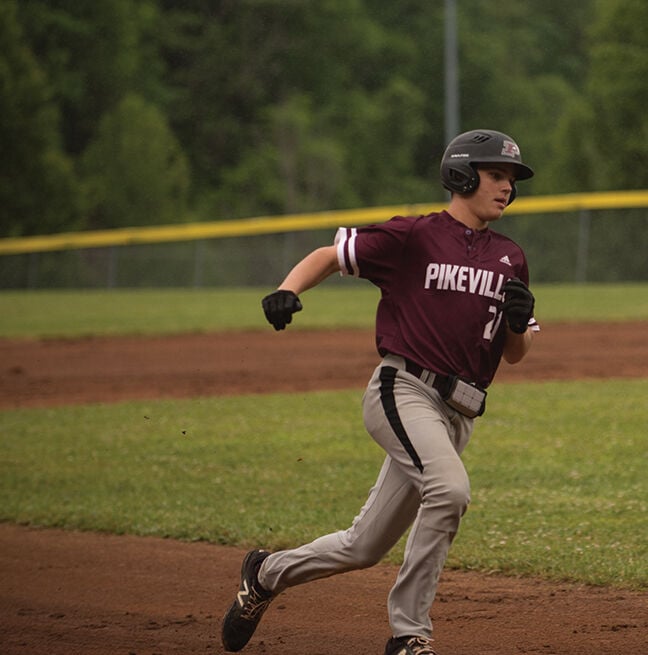 Pikeville’s Jeb Wilkerson heads to third as he tripled on the play. Wilkerson also doubled in the game and drove in two runs as Pikeville knocked off Jenkins 18-3 in three innings. 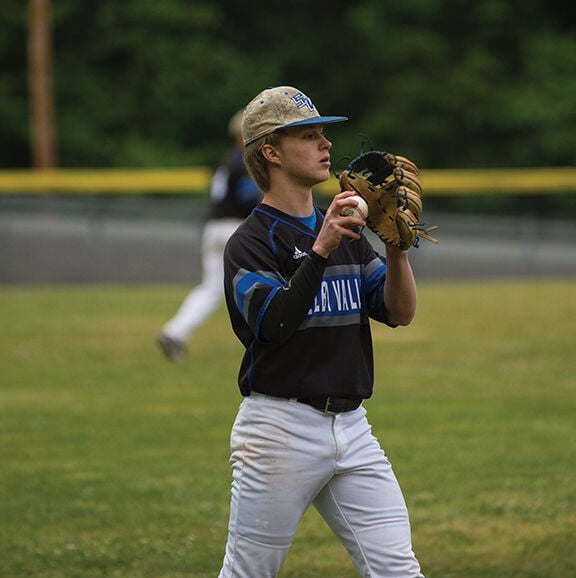 Shelby Valley’s Samuel Brown throws the ball back to the mound after an East Ridge hit Saturday night.

LICK CREEK — Pikeville had a small hiccup against Jenkins, but ended up picking up an 18-3 win over the Cavs in three innings during the opening round of the 59th District Tournament Saturday evening.

It was cool and damp at Lick Creek, but the Panthers’ bats came out scorching hot in the bottom of the first inning.

Pikeville scored eight runs in the bottom of the first to set the tone for the game.

Pikeville’s Logan Windle hit a leadoff double to get things going. Tate Walters followed by reaching on an bunt. Windle scored on the play.

Pikeville’s Tate Lakin crushed a shot to center, but East Ridge came up with an incredible out; Lakin got a sacrifice fly on the play as Walters advanced to third. Dylan Thompson added an infield RBI single as the lead grew to 2-0.

Wade Hensley reached on an error allowing two more runs to score for Pikeville as the lead grew to 4-0.

Hunter Jones walked and Blake Birchfield was hit-by-a-pitch to load the bases. Jake Lowe reached on an infield RBI single as the lead grew to 5-0.

In his second at-bat of the inning, Windle had a two RBI single to push the lead to 7-0.

Walters followed with an RBI single as the lead grew to 8-0 after the first inning of play.

Jenkins got going in the top of the second.

With the bases loaded, Austin Johnson got the Cavs on the board with an infield RBI single to cut the lead to 8-1.

With the bases still loaded full of Cavs, Keegan Bentley hit into a fielder’s choice, but the throw home was late as everybody was safe on the play and another run scored to cut the lead to 8-2.

With the bases still loaded, John Addington drew a walk to score another run.

After that, Pikeville made a pitching switch to Coleton Tackett. Tackett got the Panthers out of the inning with two strikeouts as Jenkins left the bases loaded to end the inning.

After that, Pikeville went back to work.

In the bottom of the second, Jeb Wilkerson hit an RBI double as Pikeville pushed the lead to 9-3.

The Panthers put the game away in the bottom of the third with nine more runs.

Carson Salyers reached on an error to get things started. Noah Jarrell was hit-by-a-pitch to put two runners on. Bash Ryan drew a walk to load the bases.

With the bases loaded and no outs, the first run of the inning scored on a wild pitch. Duty got on base as another run scored as well.

Pikeville’s Josh Hughes added a two RBI double as the lead grew to 16-3.

Wikerson followed with an RBI triple as the lead grew to 17-3.

Salyers grounded out, but drove home another run to push the score to 18-3.

Jarrell reached on an error and Ryan walked.

That set the stage for Duty. Duty hit a shot that landed for a walk-off RBI single to end the game and help Pikeville advance to the 59th District championship game.

The Panthers were scheduled to take on Shelby Valley at 7:00 p.m. Monday night.

LICK CREEK — Both teams were playing like their season depended upon this game because it did.

In the end, Shelby Valley edged host East Ridge 9-8 in the opening round of the 59th District Tournament.

With the win, the Wildcats advanced to take on Pikeville in the 59th District championship Monday night. Shelby Valley and Pikeville both advance to the 15th Region Tournament. East Ridge is scheduled to host the region tournament as well.

East Ridge got going in the top of the first inning. Kolin Blackburn walked to get things started. Garrett Jones and Landon Robinson followed with back-to-back singles to load the bases.

With the bases loaded and no outs, Dylan Burdine delivered a base clearing single that put the Warriors out front 3-0. Burdine scored on a wild pitch during Hayden Robinette’s at-bat to give the Warriors a 4-0 lead after the top half inning of play.

Shelby Valley responded in the bottom of the first.

The lead runner was caught in a rundown and thrown out at home. Kobe Fields and Samuel Brown each drew walks to load the bases after that.

With the bases loaded and two out, Riley Newsome reached on an error allowing two runs to score. Ben Johnson followed with an RBI single as the Wildcats cut the lead to 4-3.

East Ridge got going again in the top of the second.

Shelby Valley answered in the bottom of the second with three runs to tie things up at 6-6.

Taylor hit an RBI single for the Wildcats and two runs scored on wild pitches.

After that it stayed close until the Wildcats pulled out a 9-8 win to advance to the 59th District championship.

The Wildcats will also advance to the 15th Region Tournament.

East Ridge finished the season with an 11-18 record.