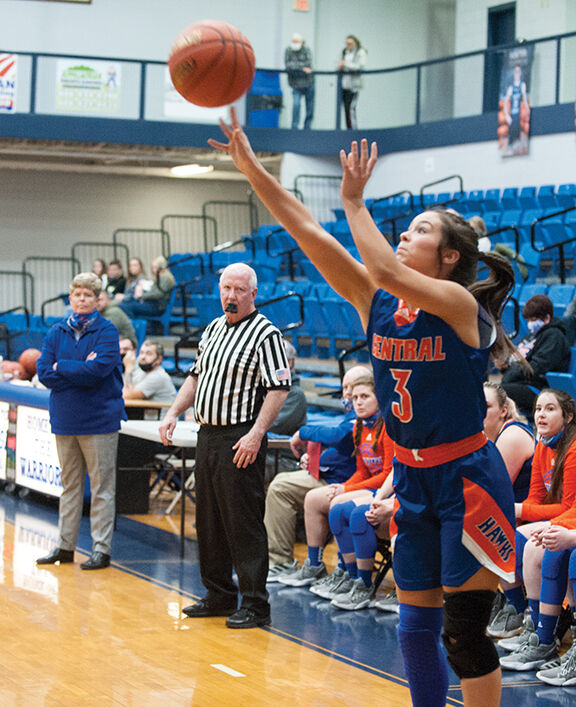 Pike Central’s Hannah May puts up a three against East Ridge Wednesday night. The Lady Hawks pulled out a 48-47 win at the buzzer against the Lady Warriors. 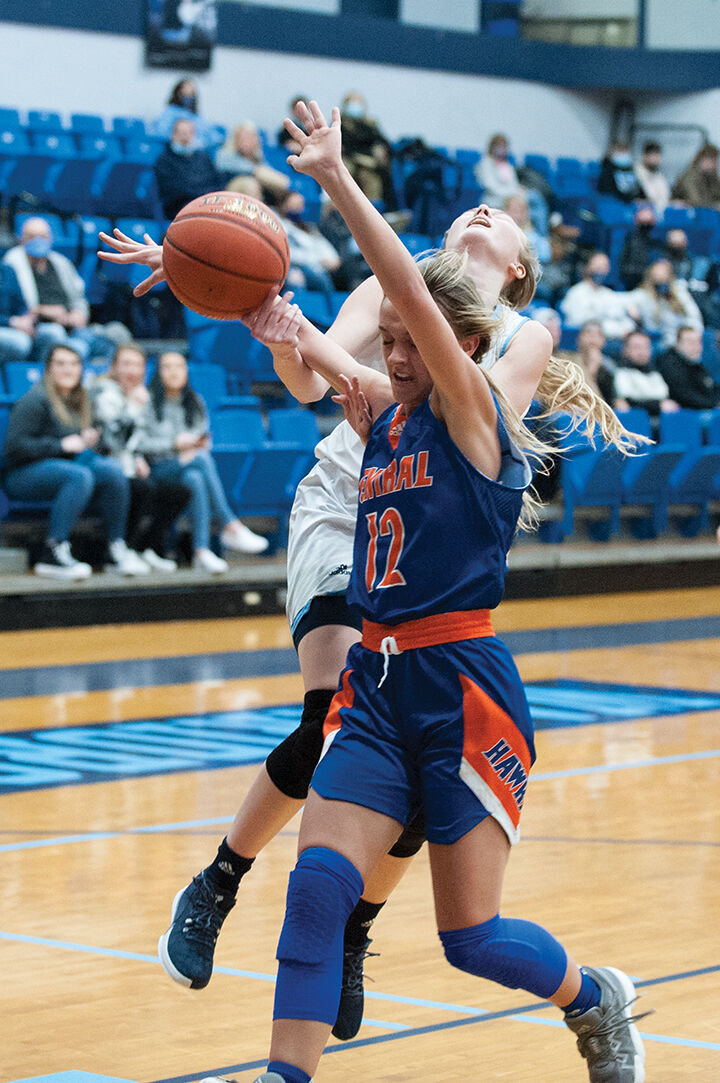 East Ridge’s Leah Wells is going up for a shot as Pike Central’s Allie Spears defends on the play. Spears was whistled for a foul on the play. Wells scored a game-high 16 points against Pike Central, but the Lady Warriors fell to the Lady Hawks 48-47.

Sometimes teams take on the personality of their coaches.

The Lady Hawks pulled off a 48-47 win at the buzzer over Campbell’s former team East Ridge. It was Campbell’s first time coaching against her former school.

“I told them no matter what, I will always have a special place in my heart for East Ridge. I love those girls, everyone of them. All I asked of my girls tonight, I said, ‘This is a big emotional game for both teams,’” Pike Central coach Denise Campbell said. “We want to win and they want to win, but I said, ‘If you leave it all out on the floor tonight and we still come up short, I’m OK. Please don’t quit for four quarters.’ That is a prime example of what happened tonight.”

Pike Central’s only lead can at the game ending buzzer.

Pike Central’s Sarah Justice scored with just under six seconds left to cut the lead to 47-46.

On the inbounds, Justice tipped the ball and tracked it down. Her shot didn’t fall. Lindsay Bowman grabbed the offensive rebound and she put the ball back up right before the buzzer sounded. As the buzzer sounded, the ball fell through the bottom of the net giving Pike Central the buzzer beating win.

“They just never gave up,” Campbell said. “That’s what I’m so impressed with them. Every day at practice, even all of their losses and we’ve taken some hard knocks, they’ve never ever quit. The effort has been through the roof. I get chills about them because they’re so… Getting to see both of my schools… To see them get this emotional win, they were saying, ‘Coach we got this for you.’ I told them it’s not for me, it’s for you and that’s what it’s all about. That’s just the Pike Central Lady Hawks. They have never given up and the effort displayed is just across the board.”

The Lady Warriors took a 35-27 lead entering the fourth quarter of play.

After East Ridge’s Sylvia Ratliff split a pair of free throws with 6:34 left, Taylor scored again for the Lady Hawks to cut the lead to 38-31 with 6:15 left.

Then Hannah May stepped behind the three-point arc and knocked down a three for the Lady Hawks to cut the lead to 38-35 with 5:06 left.

East Ridge’s Breanna Taylor stopped the Lady Hawks’ momentum with a basket at the 4:57 mark; she was fouled on the play, but missed the free throw. Haleigh Damron came up with the offensive rebound and she was fouled. Damron knocked down both of her free throws to give the Lady Warriors a 42-35 lead with 4:43 left to play.

Pike Central’s Emalie Tackett followed with a basket and she was fouled on the play; Tackett knocked down the free throw to cut the lead to 42-41 with 4:05 left.

Justice kept Pike Central alive as she scored and was fouled with 50 seconds left to play; she knocked down the free throw to cut East Ridge’s lead to 46-44.

That set up the wild ending and Pike Central pulling out the 48-47 buzzer beating win.

May led the way for the Lady Hawks with a team-high 11 points. Tackett followed with a double-double. Tackett scored 10 points and pulled down 10 rebounds. Hess added nine and Justice scored seven.

Wells led the way for the Lady Warriors with a game-high 16 points. Ratliff followed with 12 and Damron scored eight for East Ridge.