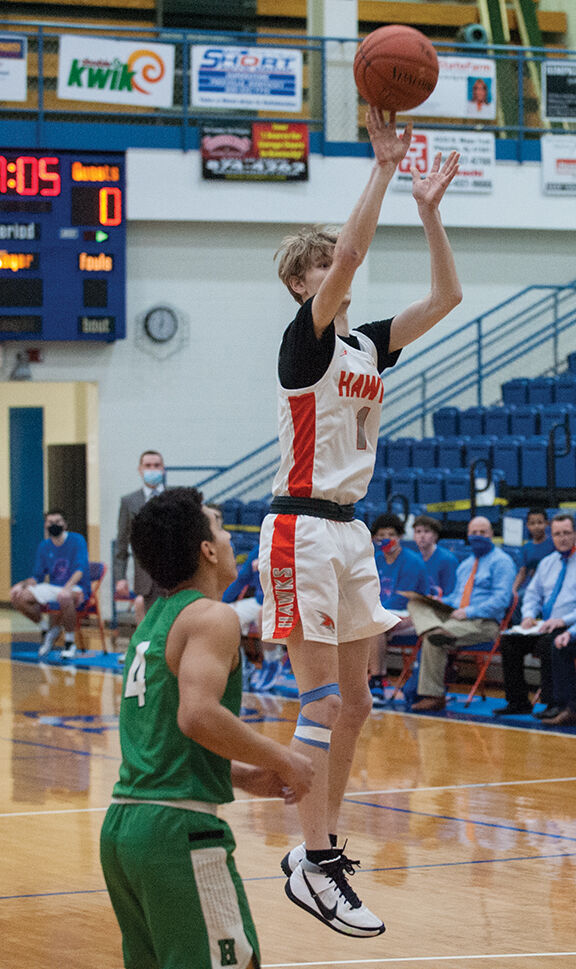 Pike Central’s Josh Du Toit goes up for a jumper against Harlan Friday night. Du Toit scored 35 points in the Hawks’ 89-77 win over the Green Dragons. 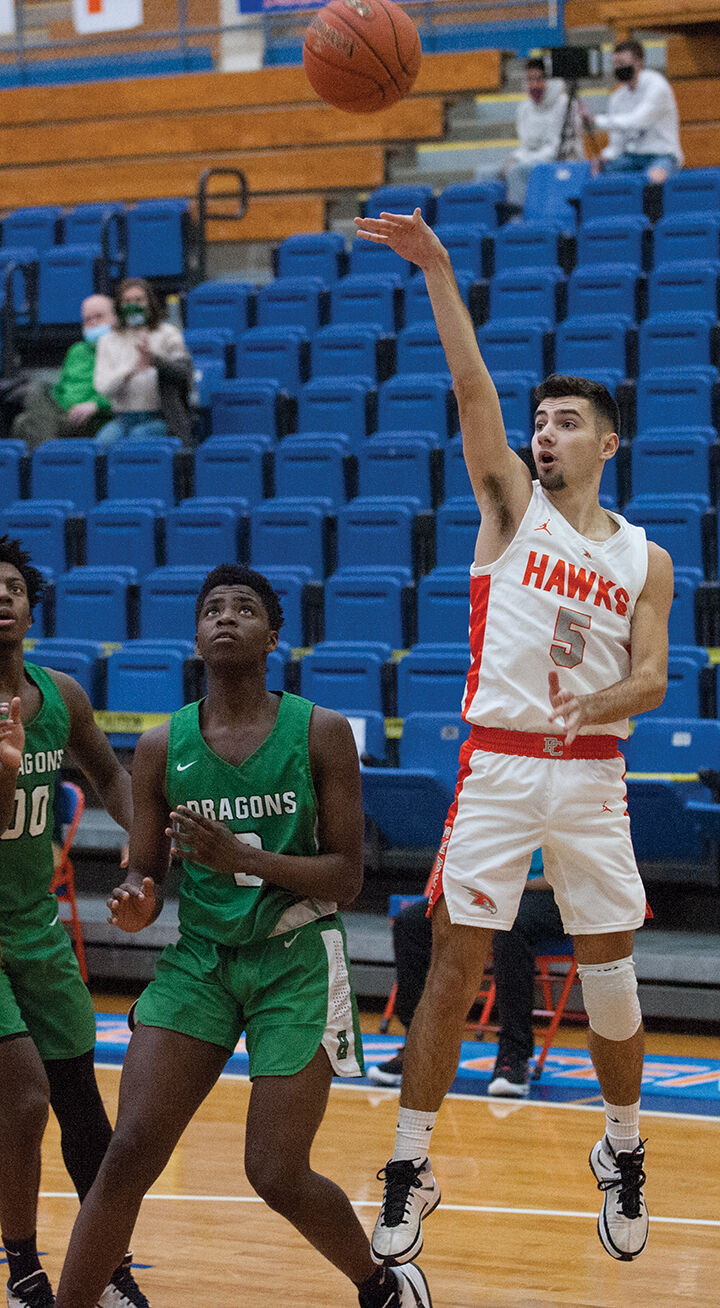 Pike Central senior Bryce Adkins puts up a floater against Harlan Friday night. The Hawks picked up a big 89-77 overtime win over Harland and followed it with a 64-63 win over Perry Central Saturday night.

The Hawks ended regulation on a torrid run to force overtime.

In overtime, Pike Central put the Green Dragons away to pick up an 89-77 overtime win Friday night.

The Hawks (7-2) handed the Green Dragons (6-1) their first defeat of the season.

Pike Central followed its win over Harlan with a 64-63 win over Perry Central Saturday evening.

All eyes were on Harlan’s Jordan Akal at the start of the game. Akal is one of the state’s top scorers and top players.

By the end of the night, Akal had to share the spotlight with Pike Central’s Josh Du Toit and Jaylen Rigdon. Du Toit finished with a game-high 35 points, while Rigdon finished with 27 points. Akal finished with 32 points. Akal was averaging 29.8 points per game coming into the contest with the Hawks.

Harlan had a chance to potentially put the game away. With 1:28 left in the fourth quarter, Kyle McClendon stepped to the free-throw line with a one-and-one. He missed the front end of the bonus and Pike Central got the rebound.

Pike Central’s Kasope Lawrence pulled down an offensive rebound and scored on the putback to cut the lead to 70-62 with just 1:20 left.

Pike Central forced a turnover and Du Toit knocked down a three with 58 seconds to cut the lead to 70-65.

Akal stepped to the line and knocked down a pair of free throws to push the Green Dragon lead back to 72-65.

Pike Central’s Rigdon answered with a pair of free throws of his own with 51 seconds to play.

The Hawks forced another turnover and Du Toit knocked down another three to cut the lead to 72-70 with just 31 seconds left.

Pike Central got the ball back and Lawrence scored with 21 seconds left to tie things up at 72-72.

Both teams had another possession, but couldn’t score in regulation.

In overtime, Rigdon started things off by splitting a pair of free throws with 3:28 left.

The Hawks weren’t finished, though. Rigdon knocked down a three and Du Toit scored another basket to cap off a 10-0 run to open overtime and give Pike Central an 82-72 lead.

The Hawks knocked down seven of their final eight free throws to secure the win.

Harland jumped out to the early lead over Pike Central.

Akal knocked down a three with 4:42 in the first quarter to give the Green Dragons a 10-5 lead.

Pike Central held a 19-18 lead after the first period of play.

Harlan took the lead in the third quarter.

Pike Central senior Bryce Adkins knocked down a big three with 2:40 left to cut the lead to 47-44.

Lawrence knocked down back-to-back baskets late in the third for the Hawks to cut the Harlan lead to 53-52 entering the fourth quarter of play.

Pike Central picked up a 64-63 win over the Commodores Saturday evening.

Rigdon’s 27 led the way for the Hawks in the win. Josh Du Toit followed his 35-point performance against Harlan with 20 points and six rebounds. Latee Childers added nine points. Bryce Adkins followed with eight points for the Hawks.

Perry Central finished the game 26 for 43 from the field (60.5 percent). The Commodores were three of 10 from three-point range (30 percent). Perry Central knocked down eight of 10 free throws (80 percent).