You have permission to edit this article.
Edit
Home
News
Sports
Covid-19
Obituaries
Classifieds
Contact Us
Subscribe
e-Edition
Sports Photos
Everything Home
1 of 2 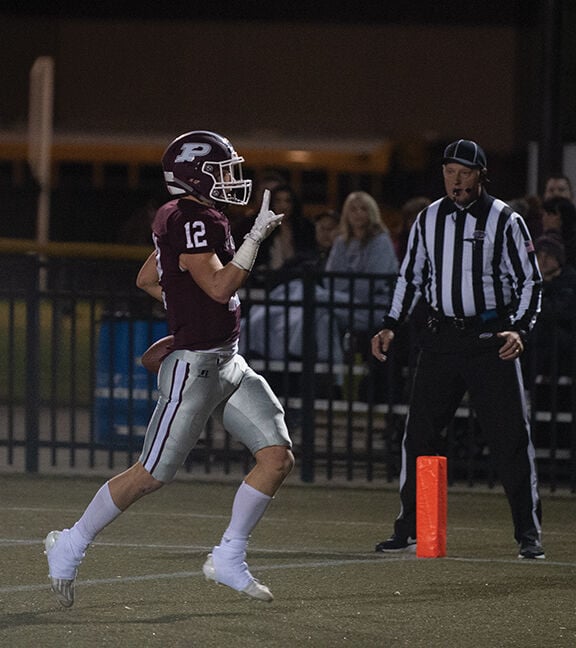 Pikeville’s Blake Birchfield celebrates as he heads into the end zone for a score against Hazard last Friday night in the Class A playoffs. 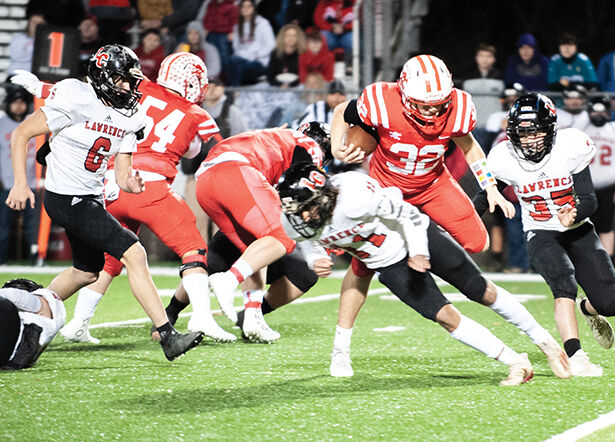 Belfry’s Braxton Hatfield runs with the ball against the Lawrence County last Friday night in the Class 3A playoffs.

Pikeville settles down, rolls past Hazard

Pikeville wasn’t about to overlook Hazard last Friday in the Class A District 7 championship.

The Panthers fell behind the Bulldogs early, but after that, Pikeville dominated the rest of the game.

Pikeville picked up a 28-6 win over Hazard to claim the district championship.

The Panthers got the ball first.

Pikeville drove the ball down the field, but Hazard safety Andrew Ford came up with an interception in the end zone; Pikeville quarterback Isaac McNamee was looking for Wade Hensley on the play.

Hazard used the momentum from the interception and turned it into points.

Pikeville answered as Blake Birchfield scored on a 19-yard TD run as the first quarter ended to tie things up at 6-6.

On the Panthers’ next possession, Birchfield scored on a 29-yard TD run with 2:56 left in the first half. McNamee found tight end Grant Scott for the two-point conversion to give the Panthers a 14-6 lead.

Hazard tried to answer before halftime, but a couple of big penalties hurt the Bulldogs’ chances. Hazard’s Legend Goins tried to cut into the Pikeville lead as he attempted a 30-yard field goal before the half ended. Goins’ kick was no good and Pikeville held a 14-6 halftime lead.

Pikeville got back on the scoreboard late in the third quarter as McNamee found Hensley for a nine-yard TD pass with 2:51 left in the quarter. After the extra-point, Pikeville held a 21-6 lead.

Hazard tried to answer as the Bulldogs marched the ball deep in Pikeville territory, but the Panther defense held and forced the Bulldogs to turn the ball over on downs with 11:36 left to play.

From there, Birchfield put the finishing touches on the win as he broke a 42-yard TD score with 5:56 left to play. That pushed the lead to 28-6.

Birchfield led the way for Pikeville as he rushed for 189 yards and three TDs on 24 carries.

MacNamee finished the game seven for 10 for 43 yards and a TD. He rushed for 39 yards on 10 carries.

Hazard turned the ball over on downs on its next possession and Pikeville took over and ran the clock out.

Hazard finished the season with an 8-5 record.

Pikeville (11-2) is scheduled to host Williamsburg at 7:00 p.m. Friday night in the Class A region finals. Williamsburg enters the game with an 8-3 record.

After losing to Belfry 42-13 at Haywood Field on October 15, the Lawrence County Bulldogs came back to the same venue determined to have a better outcome last Friday night in the Class 3A District 8 championship.

The Bulldogs wanted to not only prove they were the best team in Class 3A District 8, but also end the Pirates season in a playoff game and move on to the region championship game this Friday.

The Bulldogs were more competitive on this night against Belfry, but in the end it was coach Philip Haywood’s squad who made one more big play than the visitors, as the Pirates knocked off Lawrence County 21-14.

Zayne Hatfield got the Pirates on the board in the early going via a three-yard TD run. A successful Gideon Ireson extra-point made the score 7-0 Belfry with 10:10 left in the first quarter.

Belfry doubled their lead with 2:46 left in the first frame. Caden Woolum uncorked a pass to Cameron Varney that he took for a 26-yard TD. Ireson’s point after try (PAT) was good, and the Pirates led 14-0.

There was no more scoring in the first half. The game remained 14-0 at the intermission.

If anyone thought Belfry was going to roll to victory in the second half, the Bulldogs had other plans.

A long Lawrence County run midway through the third quarter set the Bulldogs up at the Pirates one yard line, but they were backed up to the 10 on a holding penalty.

Another penalty and a fumble then backed them up to the 21, but on fourth and goal from the 10, Alex Strickland threw a jump ball into the end zone that Nick Collinsworth out-dueled Pirate defenders for and came down with for a TD. Logan Southers nailed the extra-point and the Belfry lead was cut in half at 14-7 with 6:18 left in the third quarter.

The next Pirate drive stalled and the Bulldogs evened the score on their next possession.

A five-yard TD run by Dylan Ferguson and a successful extra-point tied the score at 14 all with 11:42 left in the game.

The Belfry offense came up clutch shortly after. With 5:54 left in the contest, Issac Dixon cashed in with a three-yard TD run. A successful Ireson extra-point put the Pirates ahead at 21-14.

The Bulldogs attempted to win the game on their next drive, getting all the way down to the Belfry 19-yard line and aided by a diving catch out of bounds on fourth and three and a pass interference penalty on the Pirates.

However, it was Belfry that made the play of the night. With about a minute remaining in the game, Braxton Hatfield intercepted a Strickland pass to put the game on ice and send Belfry to the next round of the playoffs.

Dixon had a huge night on the ground, running for 142 yards and a TD on 16 carries. Braxton Hatfield contributed in the offensive backfield as well, rushing six times for 40 yards.

Woolum’s one pass completion on the night was also Varney’s one catch on the night that went for a 26 yard score.

Haywood offered praise for Braxton Hatfield and his performance against the Bulldogs.

“We had some guys banged up and people not playing tonight, and Braxton played fullback and linebacker all night,” said Haywood. “We alternate him at fullback, but he played all night at linebacker and finally made that big play for us. I’m really proud for him. He’s kind of hung in there this year and kept working until he got on the field more, and that was a huge play. We told the defense that we need to make a play. They’re running out of time. And they rose to the occasion.”

Haywood also praised his team for stepping up and making plays despite the fact that the momentum shifted to Lawrence County in the second half.

“They certainly had the momentum,” said Haywood. “They tied the score, they had everything going their way and we had to make some plays. We showed our offensive line a couple of things at halftime. The first series didn’t help any, but coming into the next drive, we kind of gave what we had to do. I think we had to pick up a fourth down and do a couple of plays but from there, that gave our defense a little more life with the way we stopped them on that last drive.”

Belfry improved their overall record to 6-6 on the 2021 season with the win, while Lawrence County’s season came to an end. The Bulldogs finished the season with an 8-4 record.

By beating the Bulldogs, the Pirates have advanced to the region championship game of the Class 3A 2021 UK Orthopaedics State Football Finals and they will travel to Pineville on Friday night to face coach Dudley Hilton’s Bell County Bobcats. Kickoff is set for 7:00 p.m.