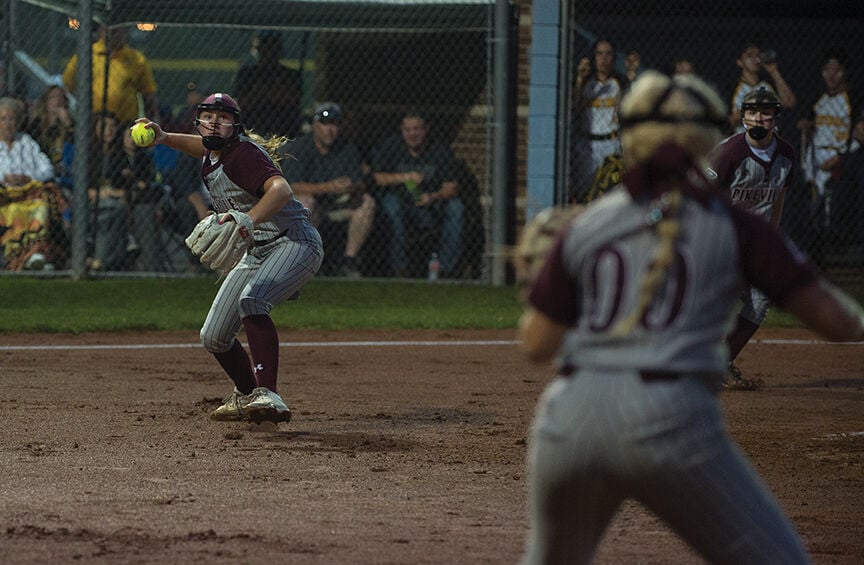 Pikeville pitcher Emily Ford fields the ball and prepares to throw to first base against Johnson Central Monday night in the 15th Region championship at East Ridge. The Lady Panthers fell to Johnson Central 10-0 in six innings. 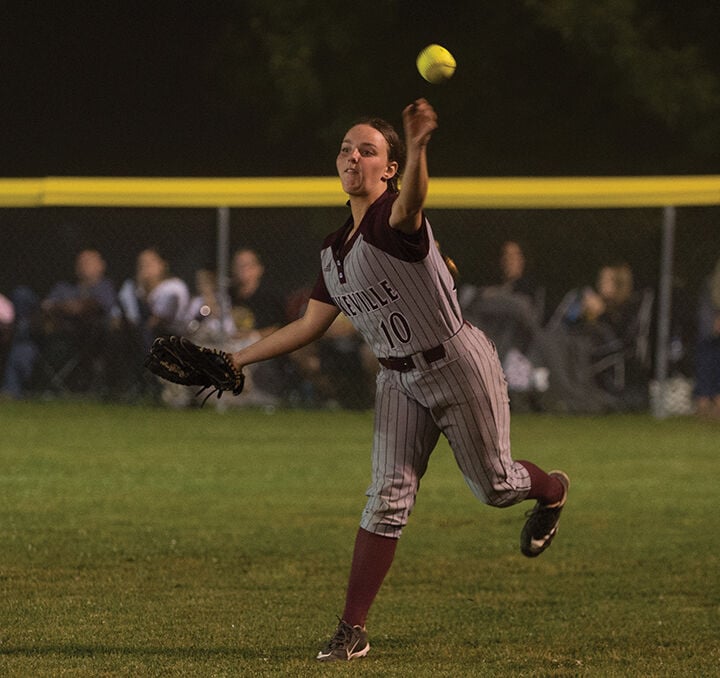 Pikeville outfielder Caroline Brown throws the ball back into the infield after a Johnson Central hit Monday night in the 15th Region championship at East Ridge.

The Lady Panthers fought, but came up short as Johnnson Central picked up a 10-0 win to capture the 15th Region championship.

Monday night, amidst the thick cover of fog and bad field conditions, Randi Delong sent out a two run homer early in the game to set the tone for Johnson Central in the 15th Region championship.

But she didn’t finish with just a monstrous two run shot that almost uprooted a 20 foot pine tree in dead center field.

She put the game on ice with a grand slam homer to help power Johnson Central to a 10-0 win over Pikeville in six innings of play in the 15th Region championship game.

Chloe VanHoose did the rest on the mound for the Lady Golden Eagles. VanHoose pitched her second straight shutout win of the tournament. VanHoose finished the game with a one-hit shutout in six innings of work. She struck out 13 batters and walked one. She was named tournament MVP.

The game was scoreless heading into the bottom of the third inning. Johnson Central’s Kendal Hall hit a leadoff single. Then Randi Delong stepped to the pate and hit the two-run homer to dead center. There are a couple of tall pine trees right behind centerfield. They probably stand around 15-20 foot tall. She nearly cleared them with the bomb.

That was her 18th home run on the season.

That gave Johnson Central a 2-0 lead.

Johnson Central got going again in the bottom of the fourth inning. With one out, Macy Conley reached on an error. Mayson Delong hit a bloop single; that set up Hall. She cleared the bases for a two RBI double to push the lead to 4-0.

Johnson Central stayed on the attack in the bottom of the fifth inning. Abigail Williams hit a leadoff single and Claire Gamble followed with a sacrifice bunt. Mayson Delong added a bunt single to load the bases. Hall followed with an infield RBI single to push the lead to 5-0.

With the bases loaded, Randi Delong stepped to the plate once again.

This time, she pulled the ball down the right field fence for a grand slam homer to push the lead to 9-0.

That home run also placed Randi Delong in a first-place tie for most home runs in the state this season. She is currently tied with Tanlee Hudgins from Green County.

In the bottom of the sixth inning, Delong stood at the plate with the bases loaded. This time, Randi Delong didn’t get to swing for the fences as the game ending run came off of a passed ball.

Olivia Hall had Pikeville’s only hit of the night.

Ford suffered the loss on the mound for Pikeville.

She had eight strikeouts in the game to bring her to an even 400 strikeouts on the season. She is currently the state’s strikeout leader and is tied for most wins in the state with 27; she is tied with Kaitlyn Cissell of Bethlehem and Perry Central’s Kim Hughes. She also sits atop of the most innings pitched by a pitcher in the state this season with 236 innings pitched.

Pikeville finished the season with a 29-11 record.

Johnson Central advances to the KHSAA Fast Pitch Softball State Tournament at John Cropp Stadium at the University of Kentucky. The Lady Golden Eagles will take on Boyle County at 2:00 p.m. Friday afternoon.