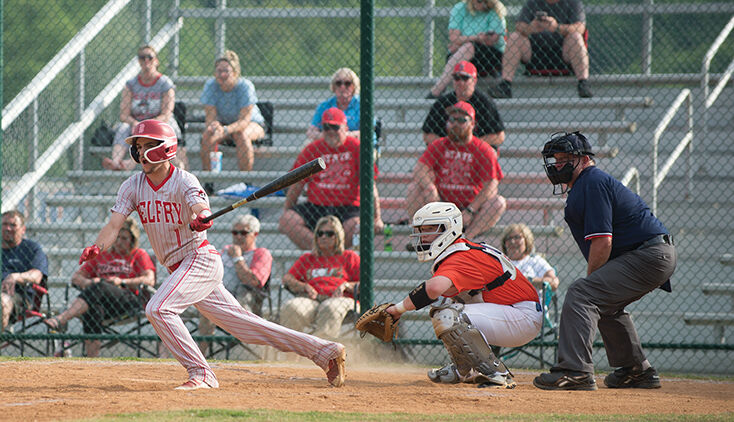 Belfry’s Gage Fields takes off toward first after connecting on a hit Monday evening against Pike Central in a 60th District matchup to secure the No. 1 seed going into the 60th District tournament. 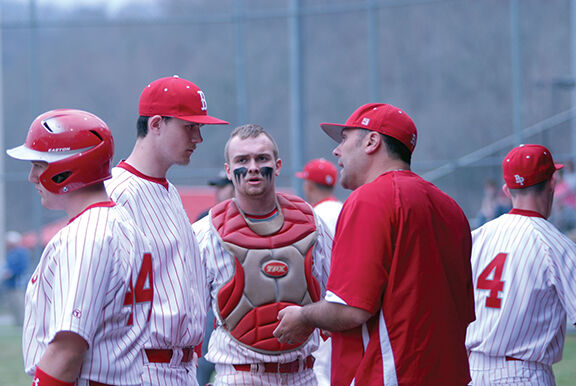 BUCKLEYS CREEK — In the last week of the regular season, Pike Central and Belfry still had something to play for — the No. 1 seed in the 60th District Tournament.

Belfry came away with a 16-0 win and the No. 1 seed in the 60th District Tournament.

The Pirates followed the Martin County win with a 9-8 win over Lawrence County on Wednesday.

Belfry will get a bye and an automatic spot in the 60th District championship and a spot in the 15th Region Tournament.

Pike Central and Phelps will play in the opening round of the 60th District Tournament at 6:00 p.m. Saturday.

Belfry got going in the top of the first Monday.

Ashton Deskins was hit-by-a-pitch to start the game for the Pirates. Gage Fields followed with a double. Steven Banks added a two RBI single to give the Pirates a 2-0 lead.

With two outs, Devin Jude added an RBI double in the top of the first as Belfry jumped out to a 3-0 lead.

The Pirates kept building from there. With two outs in the top of the second, Deskins doubled to get Belfry going. Fields drove him home with an RBI single as the lead grew to 4-0.

Belfry couldn’t add to its lead in the top of the third, though.

But the Pirates were back in business in the top of the fourth inning.

Noah Brown started the fourth off with a leadoff single. Deskins followed with a single. After a wild pitch a run scored to push the lead to 5-0. Fields walked to put runners on first and third. Fields was thrown out trying to steal second, but the run from third scored as the lead grew to 6-0.

Steven Banks singled after that and Jake Varney was hit-by-a-pitch. Jude reached on an error to load the bases. Jonathan Banks followed with an infield RBI single. Another run scored from third on a wild pitch as the lead grew to 10-0.

Fields reached on an error allowing two more runs to score as the lead grew to 14-0. Steven Banks added another RBI single to push the lead to 15-0. The Pirates added another run after that as they held a 16-0 lead.

Parker Hall picked up the win on the mound for the Pirates. He threw four innings and gave up one hit with eight strikeouts and no walks.