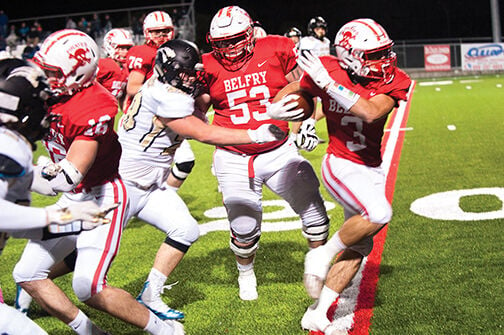 Belfry running back Isaac Dixon breaks away from a Floyd Central defender in action last Friday night. The Pirates are set to host North Hardin Friday night at 7:30 p.m. 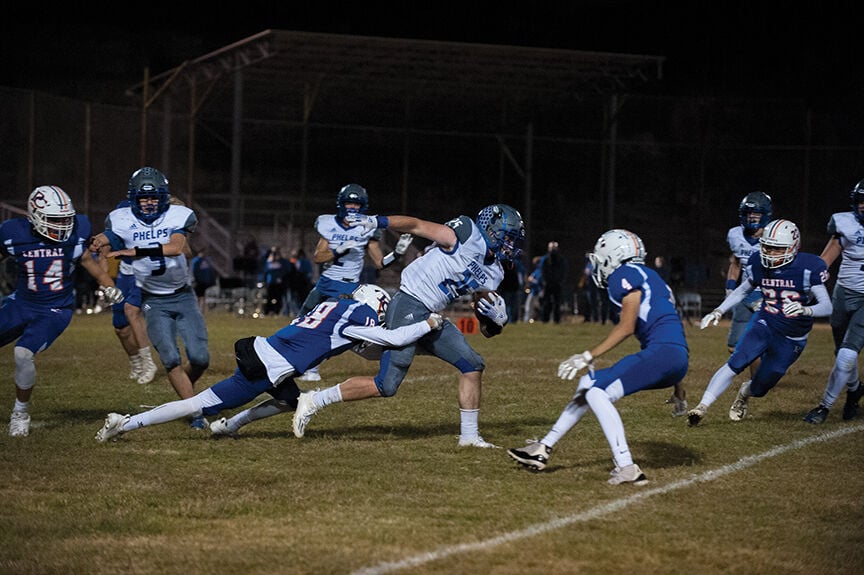 Notes: North Hardin picked up its third shutout win of the season last week with a 37-0 win over Meade County, while Belfry cruised past Floyd Central 48-18.

North Hardin is a Class 6A team with some big wins this season.

The Trojans opened the season with a 19-17 win over Fredrick Douglass.

Then came the three straight shutouts. North Hardin knocked off John Hardin 19-17, then Bullitt East 40-0 and capped it off with a 37-0 win over Meade County.

On the season, quarterback Manie Wimberly leads the Trojan offense. Wimberly is 67 for 105 passing for 738 and four TDs with two interceptions.

Lavell Wright leads the running attack with 486 yards and eight TDs on 77 carries.

North Hardin’s defense has forced 12 fumbles on the season and the Trojans have recovered eight of those.

North Hardin’s defense has only given up 17 points on the season, so the Pirates have their work cut out for them on offense.

Belfry does feature one of the top running backs in the state in Isaac Dixon, though.

Last week’s stats still weren’t listed on the KHSAA website at the time of this publication.

But in the first three games, Dixon has rushed for 628 yards and eight TDs on 35 carries. That’s good for almost 18 yards per carry. Dixon was averaging 209 rushing yards per game.

He also has three catches for 114 yards and two TDs.

Belfry quarterback Brett Coleman is having a good season as well. Coleman is seven for 13 passing for 163 yards and two TDs. He has added 94 yards and a TD as well.

Fullback Kyle Webb is starting to get going as well. Webb has rushed for 148 yards and three TDs on 35 carries.

The fullback spot is key in the Belfry offense.

If Belfry wants to knock off North Hardin, the fullback position will have to run up the middle effectively. That will allow the outside to open up for Dixon.

Belfry likes to pound the ball and wear down the opposing defense.

If the Pirates can wear down North Hardin, the Pirates will have chance to knock off the Class 6A team.

The run game is crucial against a good team.

Everything starts up front for Belfry.

If the Pirates can control the line of scrimmage and wear the Trojan defense down, look for the Pirates to have a chance to pick up a big home win.

Notes: Pikeville dropped its first game of the season by suffering a 14-8 loss to Class 6A Campbell County, while Phelps fell to Class 3A Pike Central 50-36.

Pikeville had three starters out last week, but still put up a fight.

The Panthers will look to open Class A District play with a win after having a 17-game win streak snapped.

On the season, Isaac McNamee leads the Panther offense. The junior signal caller is 46 for 75 passing for 715 yards and nine TDs with three interceptions.

Blake Birchfield has emerged as the top running back in the Pikeville backfield. Birchfield has rushed for 476 yards and five TDs on 79 carries. Nate Collins follows with 165 yards and two TDs on 24 carries.

Zac Lockhart leads the receivers with 30 catches for 541 yards and nine TDs.

The Pikeville defense has caused six fumbles and recovered all six of them.

The Panther secondary only has one interception on the season. Sam Wright has it.

Phelps’ offense has been good all season, but it hasn’t translated to wins.

The Hornets have scored 145 points this season.

Phelps is averaging 36.25 points per game.

The Hornets have only played one Class A team this season, though.

Pikeville will be the toughest test the Hornets will face all season.

Francis plays quarterback for the majority of snaps for Phelps.

He also leads the Hornet rushing attack with 768 yards and nine TDs on 75 carries.

Francis is one of the top offensive threats in Class A.

He’s had some help too.

Seth Mayhorn has rushed for 306 yards and five TDs.

Landon Dotson leads the Hornet defense with 54 total tackles and four sacks. Dotson is a big threat up front, but will have his hands full against a good Pikeville offensive line.

Who 2 Watch: The offensive and defensive lines.

The Pikeville offensive line is very under rated, but very good.

The Panthers are young and talented up front.

Pikeville has ran the ball effectively all season.

The offensive line is where everything starts for the Panther offense.

The Hornets are going to step up a level of play this week.

Phelps will have to find a way to open running lanes for Francis and Mayhorn and give Francis time to throw.

That’s going to be difficult against an aggressive Pikeville defense.

Pikeville’s defensive line is quick and gets to the ball fast.

The Hornets will have to have success up front if they want to play with the Panthers.

Bath County fell to Boyd County 55-11 in the opener, then fell to Garrard County 30-14, the Wildcats followed that with a 14-10 loss to Martin County before losing to West Carter 53-12 last week.

Both teams have played Martin County and lost.

The Warriors took on the Cardinals last week and fell 40-6.

Carter Hart leads the Bath County running attack with 243 yards and three TDs on 58 carries. Quentin Lewis follows with 209 yards and a TD on 55 carries. Hunter McCoy has rushed for 148 yards on 18 carries.

The Bath County defense has forced two fumbles on the season.

Last week for East Ridge, the Warriors haven’t listed any stats on the KHSAA website at the time of this publication.

The Warriors are coming off of a tough loss, though.

How will East Ridge respond?

Isaiah Adkins has emerged as the top running back in the Warrior backfield. In the first three games, he has rushed for 335 yards and three TDs.

Jeremy Taylor has rushed for 270 yards and two scores in the first three games. Gabe Mullins follows with 155 rushing yards and a TD on 26 carries in three game.

Quarterback Zack Mason is 13 for 19 passing for 197 yards and two TDs with an interception.

The Warriors have one interception. Mullins has the only pick for East Ridge.

East Ridge has forced one defensive fumble on the season as well.

The Warriors have scored 74 points on the season, but have given up 146 points in four games.

East Ridge is averaging 18.5 points per game, but the Warrior defense is giving up 36.5.

The Warriors have to keep Bath County in check.

If East Ridge can keep Bath County to 20 points or less, the Warriors should have a chance to pick up their first win of the season.

Notes: Martin County picked up a 40-6 win over East Ridge last week, while Shelby Valley rolled to a 48-13 win over Prestonsburg.

This game could be for the No. 2 seed heading into the Class 2A playoffs.

Martin County is currently 2-0 in district play, while the Wildcats are 1-1.

West Carter looks to be the top team in the district. The Wildcats and Cardinals look to be the next two top teams in district action.

Martin County and Shelby Valley both have wins over Phelps this season; the Hornets are the two teams’ only common opponent so far.

Martin County knocked off the Hornets 52-40, while Shelby Valley picked up a 46-14 win over Phelps.

Shelby Valley used to be a run first, second and third team.

This year, that has changed with freshman Russ Osborne leading the Wildcat offense.

The Wildcats are still a run first team, but they are more balanced than they’ve been in years.

Shelby Valley has rushed for 1,059 yards this season, while Osborne has thrown for 629 yards.

Osborne is a dual-threat quarterback. He is 37 for 75 passing for 629 yards and four TDs and an interception.

Shelby Valley’s had some drops, but the receivers keep getting better each game.

Shelby Valley likes to spread the ball around.

Who 2 Watch: For Shelby Valley Keian Worrix and Anthony Pallotta.

The duo came out to play for the the first time-ever during the Phelps game.

Both players have played their whole high school athletic careers on the basketball court.

The duo are dynamic and make big plays each time they touch the ball.

Worrix leads the team in receiving in just three games.

Shelby Valley’s offense is creative and keeps finding ways to get the playmakers the ball.

Notes: Pike Central picked up a 50-36 win over Phelps last week, while Lawrence County opened its season with a 39-0 win over Magoffin County.

The Hawks have won when Matt Anderson plays well and have lost when he’s held in check.

In the first two weeks of the season, Anderson failed to rush for 100 yards either game and Pike Central lost those two games.

In the last two games, Anderson has rushed for over 200 yards in each game and the Hawks have won both of those games.

Pike Central’s defense is the biggest question at this point.

The Hawks have given up 175 points in four games.

Pike Central’s defense is giving up 43.75 points per game.

The Hawks have to outscore their opponents right now.

Pike Central will have to tighten up its defense if the Hawks want to pick up a Class 3A District 8 win.

The Hawks and Bulldogs will both be vying for the No. 2 seed in district play.

Lawrence County decided to sit out the first three games of the season and started action last week with district play.

The Bulldogs don’t have any stats listed from last week’s shutout win over Magoffin County.

Magoffin County is 0-2 in district action.

The Hornets fell to Belfry 59-20, but was shutout last week.

The Hornets are an explosive offense so far this season, but Lawrence County found a way to shut them out.

Gillespie was a dual threat quarterback last week and made a lot of plays.

On offense, all eyes are on Pike Central’s Matt Anderson and Keegan Bentley.

But don’t forget about Iricks.

Iricks does it all on the field.

He is third in rushing behind Anderson and Bentley. Iricks has rushed for 278 yards and two TDs on 27 carries.

On defense, he leads the teams with 56 total tackles and two of those have went for losses.

Aaron Slone is second on the team in tackles with 35 total tackles; that’s almost 20 less than Iricks.

Iricks is a playmaker and he needs to step up and have a big game to take some pressure off of Anderson and Bentley.

But he makes plays on both sides of the ball for the Hawks.

If the Hawks want to pick up a big road district win, Iricks will have to have another big game.